LeBron Janes and Dwyane Wade are currently producing a documentary on the 2008 United States Men’s Basketball team. This has many people asking who would have won a game between LeBron’s squad, and Michael Jordan’s 1992 Dream Team. Fox Sports Undisputed hosts Skip Bayless and Shannon Sharpe decide whether the Redeem Team or Dream Team would win: 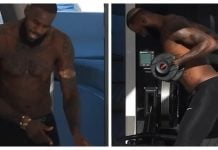 LeBron James pumping iron on a yacht in Italy (VIDEO)