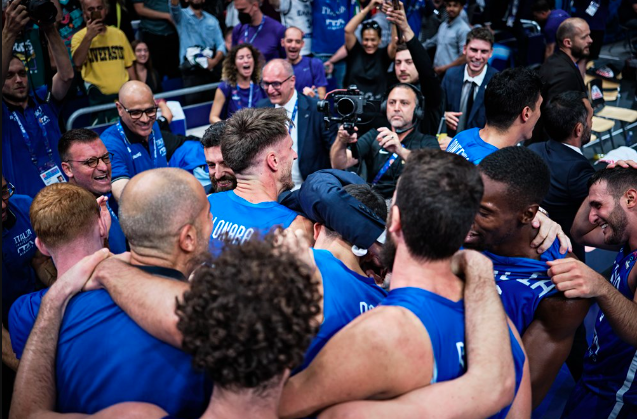 Italy coach Gianmarco Pozzecco got ejected for a second technical foul and left the Mercedes Benz Arena in tears.

But before he left, he kissed each of his players and even said goodbye to the opposing Serbia bench.

“He said: ‘Just win for me.’ That’s what he said,” Italy guard Marco Spissu revealed.

“We just came together and did what he said, just by saying: Win for me. Because he deserves it.”

At that moment, the Serbians were leading 61-57 with 4:43 left in the third quarter, the passionate Italian playcaller now out of the game and Vladimir Lucic hitting the subsequent free throws, Serbia were in firm control.

However, you back someone into a corner, they will come out fighting. Pozzecco’s ejection motivated Italy to do just that. They fought and took the game to Serbia.

And come the final buzzer, Italy’s fighting spirit earned them the EuroBasket jackpot. A stunning 94-86 win over Serbia.

Trailing by two points heading into the final quarter, Italy opened the fourth with a game-changing 16-2 run to lead 82-70. Serbia attempted but ultimately could not regain momentum.

“The ejection of our coach did something inside us”, admitted Spissu. “… and in the end we played really good defense, we supported each other and that put us on the game. I am very happy and really proud of this team.”

Spissu came up for an incredible second half as the Italian guard poured in 19 of his 22 points in the final 20 minutes. He also finished the game with six assists, four rebounds and two steals.

Runners up in 2017, one of the pre-tournament favourites and a team led by the reigning NBA and EuroLeague Final Four MVP. Serbia were the arguably the best team, performance-wise in the group stage, winning all five of their games comfortably.

However, once pool play ends, the next round is a brand new chapter.

What’s worse is, Serbia were leading for the majority of the first half and at one point led 38-24 in the second quarter. Then following Pozzecco’s departure, they became victims of an inspired Italy side that played like they had nothing to lose.

And as a result, Serbia miss out on a first EuroBasket quarter-final appearance since 2007.

“We started pretty good, most of the first half we did what we wanted,” said Lucic afterwards.

“Later on in the second half we started missing a lot of open shots which made us pretty nervous. They made basically every three-point shot and that gave them confidence and the win in the end.”

Serbia coach Svetislav Pesic added: “They deserved this victory. They played excellent basketball. They were more physical than us. We didn’t make some open shots but more important was not having continuity on defense.

For now though, Italy have their date with France on three days. The celebrations were wild both on the court and off, where a video surfaced on social media showing coach Pozzecco jumping up to hug Greece’s Giannis Antetokounmpo as he headed to the court to warm-up in delight of winning.

Their quest for a third European crown – and first since 1999 – continues. For Serbia, for all the talent they have, questions will be asked as to why they failed to deliver.