More than any other people affiliated to the Utah Jazz, it is the owner in Ryan Smith who appears the most thankful for the wonderful time and contributions of Donovan Mitchell with his franchise.

Smith expressed his gratitude to Mitchell, who turned out to be their primary core piece for the past five years and one of the proponents of their continued postseason appearances.

“The Jazz had so many great moments with Donovan over the past five years as he developed into a perennial All-Star,” said Owner Ryan Smith. “But just as important was the lasting impact he made in Utah. He is an amazing human and touched the lives of so many through his engagement in the community. Our entire organization wishes him every success in his future. Once a Jazzman, always a Jazzman.”

The return gives Utah a solid flexibility to enter a long-term stage of remodeling for the new generation of their basketball culture. Meanwhile, Mitchell can only be happy to land on a Cavs team that is ready to take over as one of the most promising teams to watch next season.

Mitchell, 26, was originally drafted by the Denver Nuggets for the 13th pick of the 2017 Draft. He was then shipped to Utah via trade, and now currently stands as a three-time All-star. 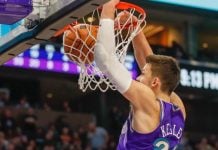