Steph Curry is one of the most iconic NBA players. The four-time NBA champion has changed the way the game is played with his exceptional shooting ability.

But it took some time for the point guard before he achieved the status that he holds now. Jeremy Lin had a chance to see young Curry make his first steps in the league.

The two players were teammates during the 2010-2011 when Curry was a sophomore while Lin was a rookie. According to Lin, he saw potential for Steph to be become a great player, but he did not expect him to reach such a high level.

Via Stuart Hodge of Sky Sports:

“I did not think he was going to be that good,” Lin said. “But I didn’t understand why Steph was treated the way he was in that one season I was there. I felt like he was really, really good. As poorly as he was treated, he still averaged 18 or 19 points. I thought, ‘Imagine when this guy gets a couple more years of experience under his belt, and really gets the reins, the keys to the franchise, what he will be able to do’. 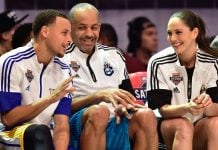 Grant Williams to Steph Curry: “I wore 30 in high school because of you”