Every time Khimki Moscow Region needed a go-to guy this season, playmaker Tyrese Rice was there to make the difference. Rice has been unstoppable all season as he led Khimki to the Eurocup Finals. His great performances night in, night out throughout the season have not only given Khimki a chance to win its second Eurocup title, but earned Rice the honor as the Eurocup Most Valuable Player for the 2014-15 season. Rice led Maccabi Electra Tel Aviv to the Turkish Airlines Euroleague title last season, during which he claimed Final Four MVP honors, and he has carried his personal momentum into the 2014-15 season as a dominant player in the Eurocup. He started all of his team’s 22 games entering the Eurocup Finals and scored in double figures in 20 of them, including the last 13 showdowns. Rice leads the 2014-15 Eurocup in total performance index rating (410) and points (378) and is second in fouls drawn (105). He is also second in per-game scoring (17.2 ppg.) and fourth in index rating (18.6). Highlighting his MVP tendencies, Rice stepped up in the most important games; he recorded the best accumulated index and scoring average in both the quarterfinals (22.5 ppg., 24.5 PIR) and semifinals (25 ppg., 22.5 PIR) in leading Khimki to the Eurocup Finals. For always being there for his team and getting better as the season progressed, Tyrese Rice is Euroleague Basketball’s choice as this year’s Eurocup MVP!

The Eurocup MVP is part of an awards structure that recognizes the finest Eurocup players for their efforts on the court throughout the season. Rice’s selection was made by a panel of Euroleague Basketball’s in-house experts based on his and his team’s performances during the Eurocup regular season, Last 32 and elimination rounds. Statistics and performance index ratings were taken into consideration for the award, but did not alone determine the winner. The list of previous Eurocup MVPs includes last season’s winner, Andrew Goudelock of Unics Kazan, 2013 MVP Nick Calathes of Lokomotiv Kuban Krasnodar, 2012 MVP Patrick Beverley of Spartak St. Petersburg, 2011 MVP Dontaye Draper of Cedevita Zagreb, 2010 MVP Marko Banic of Bizkaia Bilbao Basket and 2009 MVP Chuck Eidson of Lietuvos Rytas Vilnius. Goudelock is scheduled to lead Khimki into Game 1 of the Eurocup Finals on Friday in Gran Canaria. The second and last game of the finals is set for the following Wednesday, April 29, in Khimki.

Rice let there be no doubt regarding his abilities from the very beginning of the season; he scored 16 points in Khimki’s season opener against VEF Riga and 22 in a road win at Union Olimpija Ljubljana. Rice reached the 20-point mark three more times during the regular season – twice against Zenit St. Petersburg and once more against VEF in the Latvian capital. Rice made 65.6% of his two-point shots and 87.5% of his free throw attempts to average 15.6 points and 4.9 assists for the regular season. Rice opened the Last 32 with a 25-point performance against FoxTown Cantu. He kept scoring in bunches throughout the Last 32, while boosting his assist average to 6.3 in those six games and hitting 47.8% of his three-point shots. When the elimination rounds started, Rice knew it was crunch time and brought out his best basketball. He had 22 points and 6 assists in Game 1 of the eighthfinals against Zenit and sent Khimki to the next round with another strong performance – 15 points and 7 fouls drawn – in Game 2. When Khimki visited Valencia Basket in the quarterfinals after being eliminated by the same team last season, Rice was ready, leading his team to a 75-76 win with 27 points. He added 18 points and 10 assists in Game 2 to launch Khimki to the semifinals. Rice showed no mercy against Banvit, scoring 22 points in Bandirma and 28 at home to seal Khimki’s ticket to the Eurocup Finals. 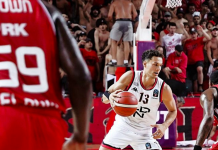 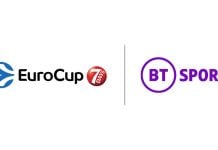