According to CNN, the Biden administration has offered to exchange Viktor Bout, a convicted Russian arms trafficker serving a 25-year US prison sentence, as part of a potential deal to secure the release of two Americans held by Russia, WNBA player Brittney Griner and former U.S. Marine Paul Whelan.

Viktor Bout, also known as ‘the Merchant of Death,’ was convicted for organizing the arms trade and links to international terrorism. Hollywood made a movie about his exploits, Lord of War, starring Nicholas Cage. 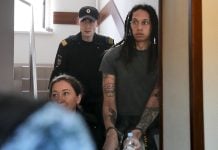