The NBA is famed for their outstanding players that seem to be born to become stars. Still, as with any sport, in basketball, there are players that play really great but do not get due coverage and love they deserve. Below is the top three list of the NBA’s most underrated players of 2022, which was compiled by RapidEssay, the company that can handle any sports book review and help you write essays for money in the blink of an eye. So, let’s dive straight into it.

When it comes to becoming an NBA player, Robert Williams has won the genetic lottery and definitely has the perfect attributes for a modern big. It’s mind-boggling to see someone of his size to run, move, and jump laterally as quickly and efficiently as he does. But even though he was a two-time SEC defensive player of the year in college, multiple knee injuries and a complete lack of outside shot had Williams slide all the way to the 27th overall pick in the 2018 NBA draft.  To add insult to injury, Williams was also quite unprofessional at times.  Because he was always late for everything, the Celtics nicknamed him the Time Lord. Due to his immaturity and lack of offensive game, he barely played in his first three seasons. However, in 2022, things completely turned around for the Time Lord. He started playing regularly and the Celtics coach maximized Robert’s mobility by positioning him at the dunker spots as the weak side defender. This enables Williams to guard the corner 3 and switch onto penetrating guards at the rim. Thus, during one possession, Williams can switch everything and cover all five players due to his quickness, size, and enormous wingspan. He has the best defensive rating in the entire NBA and when he’s the closest defender, opponents shoot less than 36 %. If he didn’t hurt towards the end of the season, Williams would be in contention for defensive player of the year. So, Williams has all chances to become a household name in the NBA.

If any NBA star can walk freely on the street without being recognized, it’s Dejounte Murray. When he’s on the road, to most people he is probably just some tall dude with freakishly long arms. And he uses those arms, as well as his impressive wingspan to lead the NBA in steals and deflections, which is only one side of his game. The Spurs’ point guard is now close to averaging a triple double with 21 points, 8.5 rebounds, and 9.3 assists per game. Without Murray in the lineup, the Spurs offense would be really stagnant. Murray is definitely an all-star and easily one of the best point guards in the NBA, but he rarely even gets mentioned by the mainstream media, but it’s not unusual for the Spurs in their unflashy ways. They always have players who flew under the radar.

There are four Timberwolves players that grab all the headlines. They’re all-star center Carl Anthony-Towns, high-flying youngster Anthony Edwards, the former all-star D’Angelo Russell, and, of course, Patrick Beverley, who’s the loudest and trash-talking his opponents. But this leaves one man from Minnesota’s starting lineup largely unnoticed by the general public. And that’s Jarred. Vanderbilt is a six-foot-nine power forward. He’s a Swiss army knife who does just about everything for the Wolves. The Wolves play a lot of denial offense based on one-on-one pressing and not allowing your man to get the ball. But Vanderbilt plays a denial defense that Dennis Rodman wouldn’t be ashamed of and is among the best ball thieves at his position. Long and athletic, Vanderbilt reads the game superbly and is always well-positioned. These qualities allow him to play free safety and protect the rim. Offensively, this player does the same glue-guy things that he does on defense. He finishes in transition, he grabs offensive boards, and he cuts to the basket hard. If you watch Minnesota’s games, it’s just not impossible not to see his impact. 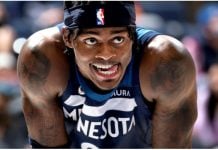 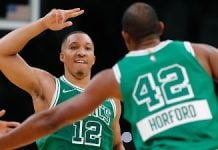