The Timberwolves wasted a 26-point in Game 3 against the Grizzlies and ended up losing by 9 points. After scoring 39 points in the first quarter, the hosts had just 12 points in the second and fourth quarters.

Patrick Beverley, who had 14 points and 5 rebounds in this game, pointed at Minnesota’s struggles with shooting but overall thought the game wasn’t as bad as it looked.

“Twelve points second quarter, twelve point fourth quarter is unacceptable,” Beverley said, per Jon Krawczynski. “We’ll look at the film. We’ll get better at that. We generated the shots we wanted. We defended well. They only had 104 points. So, it looked bad, but it doesn’t feel as bad as it really was.” 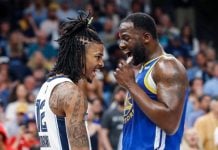