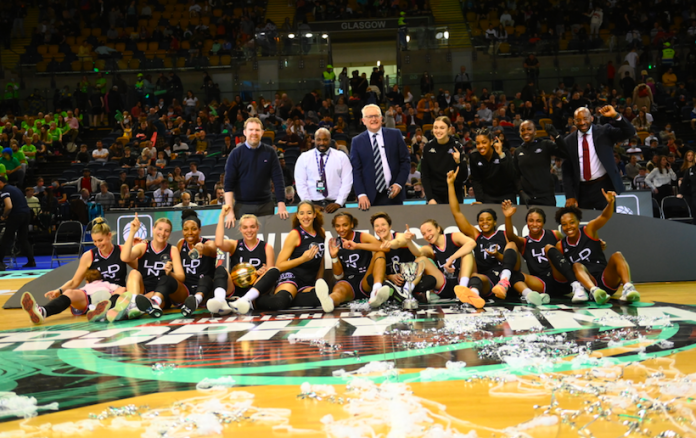 London Lions retained the Betty Codona WBBL Trophy with a comfortable 72-36 win over Sevenoaks Suns in Glasgow on Sunday afternoon.

Holly Winterburn led all scorers with 16 points on her way to Trophy finals MVP as the Lions win their second trophy of the season and are now half-way towards a clean sweep of titles.

Jo Leedham-Warner supported Winterburn with 14 points as Lions capitalised on 20 Sevenoaks turnovers, scoring 19 points from them, securing the Lions secured the biggest winning margin in a WBBL Trophy final.

The battle of the only unbeaten sides in the WBBL, both at 14-0 and undoubtedly the two best teams in the league proved to be the perfect showcase for the great Betty Codona OBE, a basketball pioneer, who sadly passed away earlier in the week. Both teams honoured her memory with 24 seconds of applause, pre-game.

Despite the firepower on show, both teams struggled to get going in the first quarter with the exception of Winterburn, who drilled three triples, en route to 11 points to give the Lions an 18-6 advantage after the first.

A sign of nerves? Feeling each other out? At times, the basketball wasn’t free flowing but with the two teams having only played each other once in the WBBL Cup back in September with Lions coming up narrow 81-76 victors.

The Suns on their side were guilty of uncharacteristic turnovers with seven of those giveaways coming in the first period. True to their ability though, they regrouped and led by the evergreen Carr, and sharpshooting Renee Busch matched London blow-for-blow throughout the second quarter.

But while Sevenoaks were putting points on the board, the Lions kept their noses in front and a buzzer-beating triple from Kennedy Leonard gave London a 33-23 lead at the half.

And that proved to ignite the Lions as a 20-2 start to the third, based on their suffocating defence and ability to turn that into easy scores at the other end gave them a commanding 56-29 cushion after three, including another buzzer-beating score from Shanice Beckford-Norton.

The game was slowly turning into a game where the sheer volume of weapons available at London’s disposal was evident. Sevenoaks’ offensive targets largely ran through Carr and Busch, whereas Lions had multiple players scoring and Azania Stewart – the WBBL Cup final MVP back in January – only registering three points, instead being utilised for rebounding and being an overall defensive leader.

The third quarter proved to be a hill too high for the Suns, only putting double-digits in points per quarter once in the second (15 points) as the two teams prepare to meet again in the league on Friday.