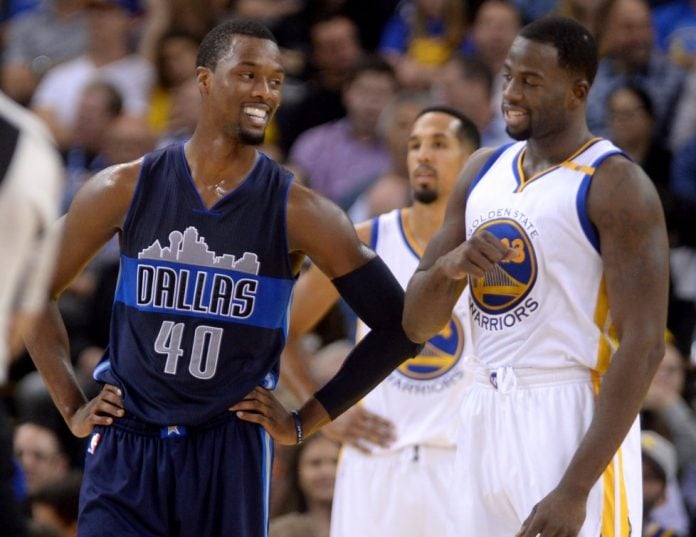 After a bitter ending in which they collapsed in a jaw-dropping fashion against LeBron James and the mighty Cleveland Cavaliers in the 2016 NBA Finals, the Golden State Warriors found themselves in a vengeance mode – ultimately having the chance to land Kevin Durant in the succeeding free agency. When the Dubs had their eyes on KD, Draymond Green delivered a valuable influence in the hot pursuit of the legendary cager.

Though things went successful and Durant joined forces with them, Green believes that former teammate Harrison Barnes hates him until now due to the recruitment that happened.

Delivering his sentiments on “The Draymond Green Show,” the star forward claimed that Barnes despised him due to what happened and the narratives that have floated on the KD acquisition.

“Harrison Barnes, I think to this day don’t like me for KD coming here,” Green said, via NBC Sports’ Josh Schrock. “And the reality is, I didn’t tell [Warriors GM Bob Myers] to trade you to bring KD in. … He took it very personally because of that story that came out that I cried to KD in the car. He took it very personally at me. This dude invites Steph, Klay, everybody to his wedding except me.

“I didn’t take it personally ’cause it is what it is. … It sucks that you got traded but you went and made your money.”

Barnes received outrage and criticism due to his lackluster performances in the NBA Finals, recording a 35 percent efficiency as the Warriors blew a 3-1 upper hand against the Cavs. In the last three games of the series wherein the Dubs had those chances to close it out, he shot 5-for-32 from the field and 3-for-15 from 3-point land.

After Durant made the shocking decision to join Stephen Curry and the co. in Golden State, the management pulled off their qualifying offer on Barnes and made him an unrestricted free agent. Eventually, the veteran inked a four-year $94 million deal with the Dallas Mavericks. Barnes told Marc J. Spears of The Undefeated last 2016 that the signing of Durant with the Warriors is a no-brainer since his teammates were talking about the situation all season long.

“You started to kind of hear rumblings,” Barnes said. “Guys were starting to feel like he was probably going to come that way. It wasn’t a surprise he was coming based on talking to the guys. It wasn’t like, ‘Boom, boom’ [after Durant’s decision].

“That’s where the story gets a little more confusing. It’s more so when that decision was made I texted my teammates and took some time to process it. I got on the phone with my agent and looked at Dallas a lot closer and then I made the decision.”

The event may seem to be frustrating from the viewpoint of Barnes, but gaining an opportunity to have an all-time great forward in the game like Durant is a thing that must be seized upon. As such, the signing molded the Warriors into becoming a basketball dynasty in the last decade – reaching three more Finals appearances and winning the two of them in a back-to-back fashion from 2017 to 2018.