In a recent interview with GQ Sports, Stephen Curry revealed that he initially wanted to join the New York Knicks when he was about to join the NBA. In 2009, Curry was considered a great potential client and the Knicks were very interested in playing him.

“I absolutely wanted to go to the Knicks. The draft was in New York, it was my dad’s birthday, June 25, 2009. He had a lot of conversations with the GM of New York at that time that he said that if I was on the board, they would pick me. So there is a lot of hype because being in New York, I thought I was going to become a New York Knick. But they are always careful what you wish for, everything happened as it was meant to be, so I’m a Warrior.”

Warriors’ superstar Steph Curry on Klay: “I’m not the shooter I am without Klay Thompson” 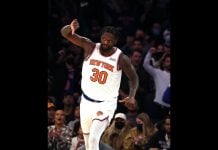 Al Harrington: “LeBron has dominated an era of his lil bros”

LeBron reacts to the Lakers’ 5 team turnovers vs. Kings