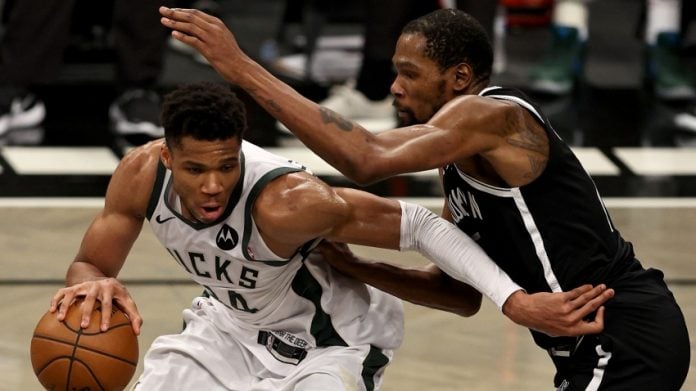 A basketball legend like Dwyane Wade surely had indelible moments in his whole career. With uncanny explosiveness, two-way wonders, and an all-time athleticism, he carved his way to becoming the third greatest shooting guard ever. From claiming three NBA titles, multiple All-NBA selections, and All-Star bids, he encountered fellow titans of the game in the likes of LeBron James and Kobe Bryant, cagers that went toe-to-toe against him on every marquee showdown.

Yet from his glorious times of playing professionally, he acknowledged two players that he literally found difficult in checking out defensively.

And these are Kevin Durant and Giannis Antetokounmpo.

In the latest segment of WIRED, Wade admitted in a Question & Answer portion that Durant was truly hard to defend due to his length and remarkable talent as a scorer.

“Well, first of all, it’s Kevin Durant. He’s 6’11”, maybe 7’1″ depending on how KD wanna be perceived. But it’s hard to guard a guy who has so much talent to be able to put the ball on the floor, can score from inside the paint, to the free-throw line, to the mid-range, to the three-point line, back at half court.”

“If I had to pick another player, I would say Giannis. It’s hard to guard Giannis because of his attack. And he’s also 7’1″. He’s a 7-footer coming down with the ability to be able to handle the ball. He runs fast, he point guards, and just as big as a center. So it’s hard to guard a guy like that who is strong and who is aggressive, and as monstrous as he is on the basketball floor.”

Durant has been arguably considered as the greatest scoring machine in NBA history. A 7-foot tall forward with a lanky appearance, he has an unbelievable offensive skill set of handling the ball with grace and tremendous shot-making – which makes him a fearsome, uncontainable opponent to face who can easily drop 30 to 50 points on any given night.

On the other hand, a monster like Giannis is a force to reckon with. Once a mysterious and doubted player who entered the league in 2014, his hard work, dedication, and commitment to the craft helped him to transform into an all-time great. The Greek Freak’s power and dominance are unparalleled and a thing of beauty and his progress throughout the years is unbelievable in nature.

These two players given by Wade are truly unstoppable and greatness personified in their own competitive way of living. What makes it more satisfying is that Durant and Giannis will continue to spar for several years to come – a war for basketball supremacy and for the prized crown of being the greatest in this era.

Giannis: “I gotta wish Tatum and his team the best moving forward”