Denver Nuggets already have a long list of injuries with PJ Dozier suffering a potential season-ending injury in his left knee.

According to ESPN’s Adrian Wojnarowski, Dozier is feared to have suffered an ACL tear. The team will move on to a more specific evaluation today.

Dozier crumpled to the floor after coming down awkwardly on a layup attempt over Cody Zeller late in first quarter on Tuesday’s loss to Blazers.

Denver has been hit with several injuries since the start of the season. Dozier was an important part of the Nuggets’ rotation since last season. 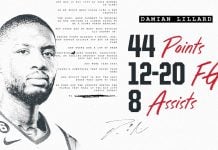