Denver Nuggets head coach Michael Malone said that the team’s starting forward, Michael Porter Jr., is out of the lineup for the “foreseeable future”, as per reporter Harrison Wind.

Malone argued that they are only being cautious about MPJ’s situation, and they are there to support the 23-year-old’s recovery.

Porter prematurely left the Nuggets’ recent game win against the Houston Rockets on Saturday after tweaking his back.

He underwent further testing on Sunday afternoon, and as this latest update was released, the former Missouri standout may literally miss plenty of games for Denver with the recovering fellow phenom, Jamal Murray.

Porter has always been troubled with his back since entering the league, even receiving two surgeries. After inking a rookie max deal worth up to $172 million last offseason, he’s currently having an abysmal campaign with an average of 9.9 points, 6.6 rebounds, and an inconsistent 35 percent shooting from the area. 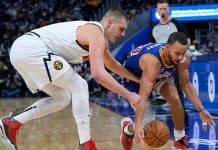