Anadolu Efes has made a poor start to the season and head coach Ergin Ataman is not happy with his players’ performance.

The veteran coach didn’t like what he saw in the loss to ASVEL Villeurbanne and called out his players.

“Of course, it’s not easy to talk after this kind of a loss. I believe in the last 12, 13 minutes, of the second half we played like a mini-basket team. The mistakes we made were like that,” Ataman told reporters afterwards.

The defending champions are still winless in the competition after three rounds (0-3). Round 4 will see Anadolu Efes travel to Milano to face top-seeded Armani on Friday. 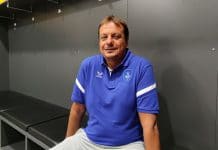