The Los Angeles Lakers star LeBron James is known for getting the most out of the offseason. This year was no different. According to Dave McMenamin of ESPN, the four-time NBA champion was working out twice a day ahead of the 2021-2022 season to get his body ready for a possibly new role on the Lakers roster.

James is thought to be moved to a power forward position with the addition of Russell Westbrook, who will be the team’s primary playmaker. In order to have advantage over his opponents, LeBron has reportedly added lean muscle while still maintaining the same weight and strength.

“We’ll start with LeBron, who looks great, and went into his two-a-day offseason regimen on his own a month before training camp started,” McMenamin said on The Lowe Post, via Jacob Rude of Silver Screen and Roll. “Rob Pelinka reports that LeBron has trimmed down. I asked LeBron about it, he kept it close to the vest, but he said ‘listen, I’m always looking for ways to find an edge, find a margin.’ I spoke to a source close to LeBron, (and) it’s not necessarily that he lost weight, but he’s added lean muscle.” 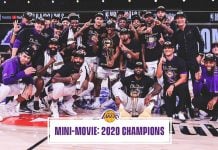 Four Lakers players out vs the Warriors Tuesday

Kevin Durant, James Harden to be included in discussion of Kyrie...