Modern NBA players are often called out by the league’s legends for being soft. The most discussed aspect is lack of physical contact and rules favoring attacking players.

Hall of Famer Reggie Miller brought up a different aspect of NBA softness. He remembered his playing days when he was eager to play even when carrying an injury if felt he could still contribute to his team. It is different from today when players sit out games for minor issues.

“I just felt if you was healthy enough if you could run up and down, if you can contribute to your team, you play,” Miller said on The Dan Patrick Show, via John Tan of ClutchPoints. “On the flip side, I get it. We made this league so soft nowadays, and I get it, but it wasn’t in my DNA to sit out. It’s hard for me to do that.” 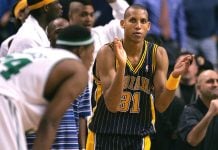 Mitch Richmond on Reggie Miller: “Reggie would never, ever cut his nails”