Chicago Bulls guard Lonzo Ball talked about his role with the team in the upcoming season and the difference between this year and last season.

“Talking to Billy, just getting back to being a more traditional PG. Last year (with the Pelicans) was different for me but whatever the coach asks me, I’ll do to the best of my abilities. This year, it looks like I’ll be PG,” Ball said.

Ball will play alongside Zach LaVine in the Chicago Bulls’ perimeter, while the franchise also signed DeMar DeRozan this offseason along with Ball and Alex Caruso.

Ball started all 55 games he appeared in and averaged a career-high 14.6 points for New Orleans in the 2020-21 season. He only dished 5.7 assists per contest. This was the second-lowest average of his career.

Despite that, Ball improved his shooting ability, playing off the ball the last season. He posted career highs in three-point percentage (37.8), field goal percentage (41.4), and free-throw percentage (78.1).

The Bulls are hoping to return to prominence this season and Ball will play a huge role for his team in the upcoming season, as Chicago will try to put an end to a five-year playoff drought. 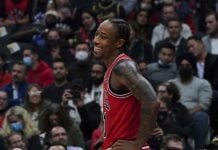