Utah Jazz star Donovan Mitchell appears to have fully recovered from an ankle injury which bothered him in the latter part of the last season. The 25-year-old shooting guard was dealing with the injury during the playoffs as well. After securing the number one seed in the Western Conference, the Jazz reached the second round where they were knocked out by the Los Angeles Clippers.

Mitchell thinks that the Utah would have been able to reach the NBA Finals if the players, including himself, stayed healthy. At the same time, he was respectful to those teams that went further than the Jazz.

Via Sam Amick of The Athletic:

“But now you’re adding back the jumping and the athleticism. The ankle feels good. I’ll be ready to go. I think last year definitely was shaky. There were just so many different obstacles with the ankle and whatnot, but — like I said — no slight to Phoenix or Milwaukee or the Clippers, you know, (but) I feel like if we were healthy, you know, we, we get to the Finals. I feel like we (would) win, but you know it’s all easy when you say ifs, ands or buts. It’s easy to say that.”

This past season, Mitchell averaged 26.4 points, 4.4 rebounds and 5.2 assists per game. He also became an All-Star for the second time in his career. 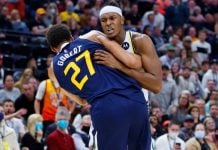 Armani Milano announces sold out for clash with Olympiacos