The Tampa Bay Buccaneers quarterback Tom Brady is beginning his quest for his eighth Super Bowl ring tonight, but his legacy as an all-time NFL legend is already cemented and now looks to be viewed as one of the greatest athletes of all time. Even when Brady was still chasing Joe Montana’s Super Bowl total in 2013, TB12 told Julian Edelman quote: “I ain’t going for Montana. I’m going for Jordan.” Award-winning journalist, TV host, and author Skip Bayless and a three-time Super Bowl Champion and Pro Football Hall of Famer Shannon Sharpe debate whether Brady is better than Michael Jordan: 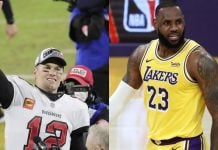