This coming season, Kent Bazemore will team up with LeBron James on the Los Angeles Lakers after signing a one-year deal with the team. During his 10-year NBA career, the 32-year-old small forward was used to playing against James and the experience was tough. He is excited to finally be on the same team as LeBron.

“LeBron, how he can see the floor I’ve always admired that about him. I said earlier that guy caused me a lot of mental and physical pain throughout my career. So I’m looking forward to kind of being on the same side with him and trying to get the job done,” Bazemore said during his intro press conference.

“I have a lot of respect to him for what he’s done for the game of basketball even winning the last championship down in the bubble. I was down there and I realized how crazy of a grind it was for them to get it done, showed a lot. Even when I was in college and he was in the league, I always wanted to play against him. I wanted to go against him.

“I got my chance my first year in Atlanta, Eastern Conference Finals. I realized how different of a beast he was and I lost a lot of sleep having to guard him. Even when we played him get chirpy his team will put me on the floor a little bit but I ain’t back down. And I think that just kind of drove to want to beat him. I would say it’s probably mutual respect. I mean, obviously I don’t have near the track record he has but he’ll probably say in 15 years that I was one of the guys never back down. And even in practice it ain’t gonna change.” 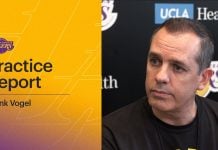