NBA Draft 2021 presented by State Farm® will take place on Thursday, July 29 at 8 p.m. ET at Barclays Center in Brooklyn, N.Y. ABC will televise the first round of the NBA Draft for the first time, and ESPN will air both rounds. Twenty draft prospects are scheduled to attend and have their once-in-a-lifetime experience on the biggest stage.

Here is a by-the-numbers look at this year’s NBA Draft:

• 8 – Barclays Center will host the NBA Draft for the eighth time. It last hosted the event in 2019 prior to the pandemic.

• 15 – This marks the 15th consecutive year that Adam Silver will announce draft selections as either deputy commissioner (seven years) or commissioner (eight years including 2021).

• 2 – The Houston Rockets franchise is set to select second overall in the NBA Draft for the first time in 51 years. In 1970, the then San Diego Rockets selected five-time NBA All-Star Rudy Tomjanovich with the No. 2 pick.

• 4 – The Toronto Raptors are poised to pick fourth overall in the NBA Draft for the first time since selecting newly elected Naismith Memorial Basketball Hall of Famer Chris Bosh at that spot in 2003.

• 7 – The Golden State Warriors’ first pick in the NBA Draft is at No. 7 overall, a spot where they have selected five-time NBA All-Star Chris Mullin (1985), two-time Kia NBA MVP Stephen Curry (2009) and NBA champion Harrison Barnes (2012) during the NBA Draft Lottery era.

• 49 – The Cleveland Cavaliers are set to pick third overall in the NBA Draft for the first time in 49 years.

• 51 – The Detroit Pistons are poised to make the first pick in the NBA Draft for the first time in 51 years. In 1970, the Pistons used the top pick to select eight-time NBA All-Star Bob Lanier, a longtime ambassador for the NBA Cares program.

• 1984 – Tennessee guard Jaden Springer is the son of Gary Springer, who was selected by the Philadelphia 76ers in the 1984 NBA Draft.

• 1992 – Loyola Maryland forward Santi Aldama (Spain) is the son of Santiago Aldama Alesón, who was a member of the Spanish National Team that competed against the Dream Team at the 1992 Barcelona Olympics.

• 2015 – Gonzaga guard Joel Ayayi (France) is the brother of Valeriane Ayayi Vukosavljevic, who played in the WNBA in 2015.

• 1 – Australia’s Josh Giddey is poised to become the first NBA Academy graduate to be drafted into the NBA. Giddey attended NBA Global Academy in Canberra, Australia.

• 6 – If NBA G League Ignite forward Jonathan Kuminga is drafted in the top six, he would be the highest-drafted player from the Democratic Republic of the Congo since Dikembe Mutombo was drafted fourth overall in 1991.

• 13 – Thirteen international players have been selected No. 1 overall in the NBA Draft, most recently Phoenix Suns center Deandre Ayton (Bahamas) in 2018.

• 27 – A record 27 international players were selected in the 2016 NBA Draft, including a record 15 in the first round and a record-tying 12 in the second round.

• 215/25 – The NBA Draft will reach fans live in 215 countries and territories in 25 languages on their televisions, computers, mobile devices and tablets.

• 24 – Twenty-four of the 60 players who were selected in the 2020 NBA Draft played in the NBA G League during the 2020-21 season, including five first-round selections.

• 49 – Daishen Nix has a chance to join Carlos Boozer, Mario Chalmers and Trajan Langdon as NBA players who grew up in the 49th state – Alaska.

• 1 – The NBA Draft will air on both ABC and ESPN for the first time ever. • 5 – Five virtual technology cameras will be used for the telecast.

• 38 – Wilson was last used as the official basketball of the NBA 38 years ago. Last seen on the court in the 1983 NBA Finals, Wilson basketballs will adorn the green room at the NBA Draft and will join the latest draft class on the court for the 2021-22 season. 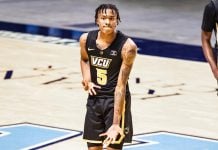 NBA Draft prospects react to working out for Lakers