Australia defeated Team USA in a scrimmage ahead of the 2020 Tokyo Olympic Games. It was the second loss for the Americans who lost to Nigeria previously. The two teams are set to meet again on Friday. For the Aussies it was their second win in this preparation cycle. Prior to facing USA they narrowly defeated Argentina (87-84).

Joe Ingles, who was the second top scorer for Australia against USA with 17 points, said his team entered the game confident they will win. “We came in here expecting to win the game and that’s what we did,” the Utah Jazz shooting guard said postgame, per Ben Golliver. 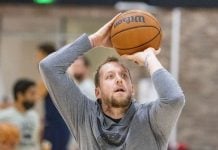