Philadelphia 76ers star Joel Embiid has been fined $35,000 for escalating the on-court altercation with John Collins by pursuing him in an unsportsmanlike manner, the NBA announced.

Atlanta Hawks big man Bruno Fernando was also suspended one game for leaving the bench area during the incident.

Fernando, who has not been a part of the team’s playoff rotation, will serve his suspension during tonight’s Game 7.

The incident occurred with 4:02 remaining in the fourth quarter of the 76ers’ 104-99 win over the Hawks in Game 6 of their Eastern Conference Semifinals series on June 18. 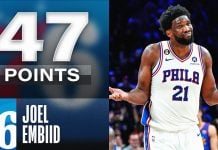