In a recent appearance in the ‘All the Smoke’ podcast, the Lakers’ coach said Kawhi Leonard is ‘cut from the same cloth as three legends like Kobe, MJ and LeBron.

“Kawhi is cut from the same cloth as Kobe, LeBron as MJ… The first time we worked out together after the trade stuff cleared, I reached out to him. I said I’m just excited to build with you, and he was like ‘when are you coming to San Diego?’

“We got in the gym, and he said ‘look coach, I like the gym quiet, I don’t like people in the gym. I like to get my work in.’ That set the tone. He’s just one of those dudes that really just about getting better.”

Leonard had an excellent run with the Clippers this postseason until he suffered a knee injury during Game 4 of the semifinal series vs. Utah.

There is fear that the player damaged his ACL, and rumors suggest he could even miss the rest of the season, and that’s a huge blow for the Clippers’ chance at an NBA title. 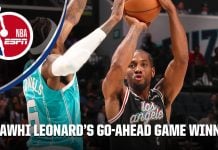