New York Knicks superstar Derrick Rose is not concerned about the Sixth Man of the Year award, but he is happy for his return to the postseason.

Rose helped the Knicks coming off the bench, as the New York franchise returned to the playoffs for the first time since 2013.

As a result, Rose is among the finalists for the Sixth Man of the Year award, which is a testament to his ability to lead the second unit.

“It’s cool, but it’s more cool being in the playoffs. Missed it for the last couple of years. Being back here, being in a market like this, it means a lot,” Rose said on his on being one of three finalists, per Ian Begley of SNY.

In 35 games with the Knicks, the veteran star posted averages of 14.9 points with 4.2 assists becoming a key contributor to Tom Thibodeau’s system.

Rose will return to the NBA Playoffs after three seasons. He last played in the postseason with the Minnesota Timberwolves in 2018. 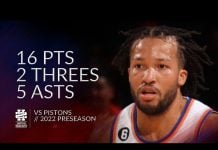