ESPN’s Stephen A. Smith was back in his role as Brick on General Hospital this week and got into a shootout with a bad guy in the soap opera episode.

The sports analyst boasted about his getting to kill someone during First Take on Tuesday and teased an upcoming love scene with a police commissioner. Now, we’re gonna level with you – we have no idea as to the context of the footage below but it’s pretty good. Plus, it’s in slow motion.

Not a bad shooting percentage, right?

Stephen A. Smith says the Lakers might not get past the play-in tournament

Stephen A. Smith tells Damian Lillard to leave the Blazers; Lillard calls him out 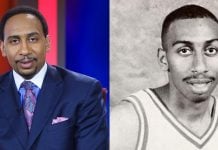 LeBron James talks on his return after Lakers’ win over Pacers

Luka Doncic says groin shot to Collin Sexton was not on...