Minnesota Timberwolves were hoping to turn things around this season and become a legit postseason contender in the Western Conference.

Alas, their record is one of the worst in the league with less than 10 games remaining in the regular season. As a result, several NBA executives are looking closely to Karl-Anthony Towns situation in the Twin Cities.

According to Eric Pincus of Bleacher Report:

Half of the league is waiting for the other shoe to drop. Will Towns force his way out of Minnesota this offseason?

Several league sources have indicated their teams are looking closely at the Timberwolves’ future. One noted: “The ‘KAT wanting to be elsewhere’ chatter increased drastically over the year.”

The Timberwolves are expected to change hands in two years from now with Alex Rodriguez and Michael Lore taking control of the franchise from Glen Taylor.

The Wolves will need to push even more for a winning team with Towns nearing the end of his current contract in two years from now. 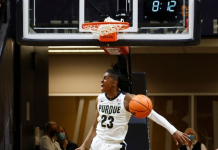