Curry went off against the Bucks scoring 41 points on 14-of-21 shooting. Curry hit 5 threes to add to his total for this season breaking another NBA record.

Curry made at least 200 3-pointers in seven straight seasons, beginning in 2012-13, before last season’s five-game campaign derailed the streak. He only needed to play 43 games to reach 201 threes this season.

The Warriors’ superstar has been excellent for the inconsistent Warriors this season averaging nearly 30 points along with 5.5 rebounds and 6.0 assists per game.

Steve Kerr’s team snapped a three-game losing streak after Tuesday’s win improving to 24-27 and remain among the teams that are in the race for the play-in tournament. 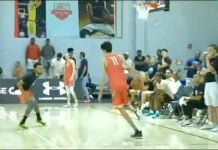