On Tuesday, the star of the Washington Wizards Russell Westbrook was criticized by Stephen A. Smith who said on ESPN’s First Take that his points mean nothing when he has no championships. The sports analyst started his comment by saying how much he respects the 32-year-old star and then proceeded with his criticism.

“Westbrook’s numbers last night mean absolutely nothing to me because even though that’s great number that’s what Westbrook can do. We all know this,” Smith said after Westbrook had 35 points, 21 assists and 14 rebounds in win over the Indiana Pacers. “He’s a former league MVP. He’s the most athletic point guard we have ever seen in the NBA history. He’s been, I believe it was four conference finals in his career. We know this.

“But here’s the reality of the situation. Russell Westbrook when we look at his game, it’s the same stuff every year. Might get a little bigger, strong, athletic, can take it to the basket. Still hasn’t got that shot going. That three-point shot. You’re in the same conference as Steph Curry for years. You’re struggling from the three-point range. You’re going up against Dame Dolla Dame Time the three-point shot ain’t there. Kevin Durant departs, you don’t make it out of the first round until you get to Houston last year.

“Last year in Houston he was an MVP candidate averaging 27-7-7, okay. But in the playoffs they obviously folded because there were going up against the Lakers and they were just overmatched. We understand that. You want out. So what do you do? You end up going to Washington. Now, I understand that I get to look at coaching because Scott Brooks should have some explaining to do to have the absolute worst defense in basketball. Any coach that has the worst defense in basketball should have some explaining to do. They are ranked 30th in the league in points allowed.”

He then on to name the players that Westbrook has played with during his career such as Kevin Durant, James Harden, Paul George, Serge Ibaka, Reggie Jackson and now Bradley Beal. “You’re played with some great great players over the years. Talent. And not a single title show for it. So to me if I’m going to look at everybody else whether it’s LeBron and Kyrie and Steph, everybody else, I got to look at that to. The numbers are the numbers. That’s Russell Westbrook, he could do that to anybody. But I’m at a point in time in his career where it ain’t about that no more. It’s about whether or not you can get to another level to win the chip.”

In response to Smith’s comments Westbrook said, per Fred Katz of The Athletic: “A championship don’t change my life. I’m happy. I was a champion once I made it to the NBA. I grew up in the streets. I’m a champion.” 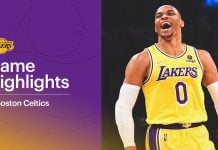 LeBron James clinging in hopes to play with Bronny in the...