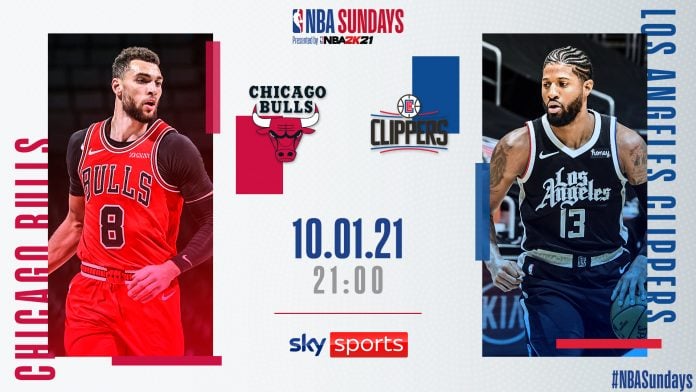 The Chicago Bulls (4-5) will visit the Los Angeles Clippers (6-3) for the NBA Primetime game which will on live on Sky Sports.

• The Clippers’ title window remains open following some offseason tweaks. Kawhi Leonard and Paul George are still two of the best players in the league. Tyronn Lue is a championship coach. The supporting cast is deep, versatile and experienced.

• Leonard and George have traveled similar paths: from Southern California roots to mid-major colleges to top-15 draft picks to NBA stardom. Neither was pegged from the start as can’t-miss, but both have emerged as NBA standouts with the size, skill and athleticism to excel at both ends of the court.

• Zach LaVine averaged a career-high 25.5 points last season as he continued to develop into an All-Star-caliber player. At 25, LaVine is still tapping into his upside.

• The Bulls are counting on internal development from the No. 7 overall draft pick in 2017 (Lauri Markkanen), 2018 (Wendell Carter Jr.) and 2019 (Coby White) to reverse their fortunes. Their young nucleus also includes rookie Patrick Williams, the fourth pick in the 2020 NBA Draft.

• Kawhi Leonard and Serge Ibaka won a championship together with the Toronto Raptors in 2018-19.

• The Bulls’ Patrick Williams didn’t even start during his freshman season at Florida State before entering the 2020 NBA Draft. He was the ACC’s Sixth Man of the Year.

Kawhi Leonard staying with Clippers is not anymore a ‘safe assumption’, per report

Kawhi Leonard expected to opt out and re-sign with Clippers this offseason, per report