The Milwaukee Bucks were unstoppable in the game against the Miami Heat, as they set a new NBA record for most made threes in the game.

The Bucks finished the contest with 29 made attempts from beyond the arc to set a new NBA and franchise record. They surpassed the Houston Rockets, who had 27 against the Phoenix Suns on April 7, 2019.

Giannis Antetokounmpo was the only player to not register one for his team, who decimated the Miami Heat by 47 points to improve their record to 2-2.

The Bucks started strong and never looked back registering 46 first-quarter points, which are the third-most in franchise history. 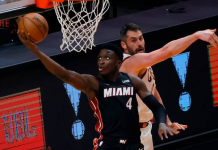