The NBA pre-season in fairness is the best time to trial aspects of the game that need improving, and then letting FIBA implement down the line (no dig intended). You may also try to Beat Baccarat online. 44-minute games though? What. Is. The. Point?

Probably best to just let you read the press release we got via email at TB HQ.

NEW YORK, Oct. 14, 2014 – The National Basketball Association announced today that it will play a 44-minute game during the 2014 NBA preseason when the Brooklyn Nets host the Boston Celtics at Barclays Center on Oct. 19. The league is utilizing the preseason contest to examine the flow of a shorter game as compared to the standard 48-minute game.

“At our recent coaches’ meeting, we had a discussion about the length of our games, and it was suggested that we consider experimenting with a shorter format,” said NBA President, Basketball Operations Rod Thorn.  “After consulting with our Competition Committee, we agreed to allow the Nets and Celtics to play a 44-minute preseason game in order to give us some preliminary data that will help us to further analyze game-time lengths.”

“When this idea came up at the coaches’ meeting, I thought it was a unique experiment that was worth participating in,” said Nets Head Coach Lionel Hollins.   “I’m looking forward to gauging its impact on the flow of the game.   Since there is a shorter clock, it affects playing time, so it’ll be interesting to see how it plays into substitution patterns.”

“I appreciate the NBA’s long history of forward thinking and willingness to try new ideas,” said Celtics Head Coach Brad Stevens.   “We told the NBA that we’d be happy to participate in this trial during a preseason game.  I look forward to experiencing it and continuing the dialogue after October 19.”

So it is FIBA rules (ish) but with an extra minute put on and kind of the same rules on timeouts. Why don’t they just adopt the European 10-minute quarters so that basketball can be near enough similar?

ADVERTS ON JERSEYS COULD BE A CONFLICT OF INTEREST

New York Knicks’ Amar’e Stoudimire has said that with the huge new TV rights deal plus adverts on jerseys possibly coming into the pipeline in 2017, during the NBA All-Star Game, there could be a conflict of interest with certain players.

Via the New York Daily News:

It all depends on the players,” Stoudemire said before Monday’s preseason home opener against the Toronto Raptors at Madison Square Garden. “A lot of players have endorsement deals. So it could be a conflict of interest, if you ask me. It depends on the company I’m in bed with. I could be endorsed by a company that’s not sponsored by the NBA, so that could be a conflict of interest.”

“Some guys got deals that are outside the NBA,” Stoudemire said. “You have an exclusive deal, which means you have to stay exclusive to that particular company.”

The Knicks’ Spanish-born point guard Jose Calderon, a veteran of the professional leagues in Europe, where advertising on jerseys is common, said he’s okay with corporate-sponsored logos on shirts — if it’s within the boundaries of good taste. […] “I’ve been doing that for a while now, in Europe and everywhere,” Calderon said on Monday. “I think it depends on how you treat the whole thing — if it’s a thousand stickers or one really nice sticker. I have no idea where it’s going to be but whatever the league decides I’m sure it’s going to be well thought out and will be the best for the league and the best for the players.”

WESLEY MATTHEWS: I’M THE BEST TWO-GUARD IN THE NBA

The Portland Trailblazers guard is a confident man, isn’t he?

Entering his sixth season in the NBA, Matthews puts himself ahead of Kobe Bryant, James Harden, Klay Thompson and Dwayne Wade (ish).

Nicolas Batum said Matthews’ defense against James Harden, who shot 37 percent against Portland in the six-game series, was “unbelievable,” saying he was the “maybe the best defender in the NBA” during the series.

“I’m never going to be the type that gets gaudy numbers to make an All-Defensive team,” said Matthews before getting to his case.

“Do I think I’m All-Defense? Absolutely. I think I’m the best two-way two-guard in the NBA. But I feel like we need to be a good defensive team within the scheme of the game. We’re not out there gambling, trying to reach and get steals. That would put us in a bind if I don’t get it,” Matthews said. 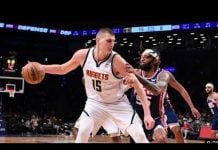