Alba Berlin might have defeated the reigning NBA champions but by the time they face the Euroleague winners Maccabi Electra Tel Aviv on October 30, the reality of the long season ahead will be very real.

In fact, at the time of writing this, the Spurs {now in Istanbul] and most of the European basketball audience will have already forgotten this. Hopefully Alba Berlin’s players will have too.

The German side, already two games into the Beko BBL season edged a team playing their first game of the pre-season. Sure the Spurs have retained the core that won the NBA championship in June, and the starting five played a chunk of the minutes on Wednesday, but this was their first game competing after several months apart. It shouldn’t come as a big surprise that this game was no blowout that some expected and that Alba Berlin were competitive.

Remember that Alba pushed the Dallas Mavericks to the limit back in 2012; a year after the Mavs won the NBA title in their own right. While the Germans shouldn’t be denied of their big moment, it’s a moment that they can’t focus too much on when the Euroleague season starts.

Facing off against CSKA Moscow, Unicaja Malaga and Euroleague champions Maccabi Electra Tel Aviv will be tough for Alba. They will look to the games against Limoges and Cedevita for two wins each and hope for a victory, at home, possibly against Unicaja to stand a chance of qualification.

Coach Sasa Obradovic, who won a great deal of respect from Spurs coach Gregg Popovich after Wednesday’s win expects big things from his side when the season begins, but knows it will be tough.

They will be facing much tougher opposition than the Spurs were in midweek.

“The previous season [we were] showing our trademark of big fight, big hustle,” Obradovic said. “We kept this throughout the whole season. We had a great atmosphere in our team. People could see this and they support us, which is very good from the previous season.

“The top favourites, Maccabi, Unicaja and CSKA, they are the three team fighting for this and the fourth spot I think is a very competitive group like all the others,” he continued. “There is no weaker group or stronger groups. This is the Euroleague and everyone wants to give the maximum.”

Obradovic will need more production from his chosen starting five but if he persists, will get it as the season progresses. The Serbian is also blessed with substantial depth off the bench. Fresh out of UConn, Niels Giffey was poor against the Spurs but his productivity will grow as the season goes. Big things are expected of him in the German capital but Obradovic calls for fans to give him time before he is properly judged.

“He won titles in college basketball but he has had certain problems to adjust to completely new basketball,” he said of Giffey. “But you see each game his improvement, he’s a smart kid, he’ll improve fast.”

Obradovic has scorers in Cliff Hammonds, Reggie Redding and Jamel McLean as well as defensive presences in Alex King, Leon Radosevic and Giffey, but even though they experienced cloud nine on Wednesday against the supposed best team in the world, it will be business as usual when the Euroleague season begins. 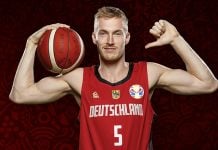