After an outstanding performance against Valencia, Vladimir Lucic claims his second MVP award this month. The Serbian international was the leading scorer for Bayern with 22 points helping his team get the win over Valencia, 90-79, on Friday (13/11). With just 3 missed shots out of 16 in total, Lucic had a career-high performance index rating in his 107th game in the Euroleague.

Vasilije Micic of Anadolu Efes, also had a remarkable performance, scoring a career-hight of 33 points against Panathinaikos OPAP, last night in Athens. In his 131 Euroleague games, that was Micic’s best performance so far showing his wide range of shots and helping his team return on the game and steal the win from the Greeks.

Jordan Loyd of Crvena Zvezda continues leading the top scorer rankings with 21.6 per game after 8 rounds in this season’s Euroleague. Loyd had another convincing performance last night (13/11) with 22 points despite his team’s loss against Real Madrid. 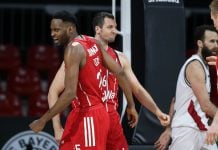 Stephen A. Smith explains why 2020 HoF class is the greatest...