The Phoenix Suns are the latest addition to the teams chasing Chris Paul, who is available for trade from the Oklahoma City Thunder.

The Suns will definitely have to add Ricky Rubio and Kelly Oubre Jr. to match salaries in potential trade.

According to Jason Gambadoro of Arizona Sports 98.7, OKC is not interested in either Oubre Jr. or Rubio in a potential deal for the veteran superstar.

Paul, 36, is still a valuable piece for Oklahoma as the team made the playoffs, with CP3 leading a young squad a shot away from the Western Conference semifinals.

However, as Gambodoro reports the Thunder don’t want to receive long-term contracts, as they are interested more in draft picks.

Paul George on trash talking from Suns: “I don’t know what their chirp is about”

Chris Paul on Devin Booker: “There’s nothing that Book can’t do” 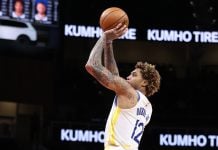