Ex-Toronto Raptors and Miami Heat skilled forward Chris Bosh, who hasn’t played in the NBA since 2016 due to health issues, remembers now-Los Angeles Lakers star forward LeBron James leaving Miami in free agency to return to Cleveland and says that the Heat team, “Definitely left something on the table.” Bosh adds, “In my mind, I will always feel like it’s an unfinished story.”

During his NBA career, Chris Bosh put up 19.2 points, 8.5 rebounds and 2.0 assists per contest in 893 regular-season games. The two-time NBA champion also appeared in 89 playoff games, averaging 15.6 points along with 7.5 boards. 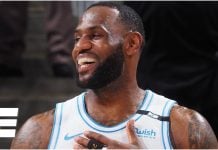 Shaq tries to put Chuck on a poster

Charles Barkley calls out Lakers and Heat after first-round exit in...