The Denver Nuggets were the team to watch in Orlando during the 2020 postseason. Mike Malone’s team showed incredible potential to become a contender in the next few seasons.

For the Nuggets to do that, they may need to upgrade their roster, especially in the perimeter. In his latest mailbag, Mike Singer of The Denver Post talked on the moves the Nuggets could make to improve their roster ahead of the 2020/21 campaign.

“There was chatter at the deadline around Pelicans guard Jrue Holiday, and I wouldn’t be surprised at all if those discussions get revisited. Holiday has one year left on his contract before he can become a free agent, so the Nuggets would need to assess whether they think he could be a long-term play or if they’re comfortable going for it next season.”

Jrue Holiday, 30, is entering the last year of his contract with the New Orleans Pelicans. The former Sixers’ point guard is considered one of the most underrated guards in the league having the ability to influence the game on both ends of the floor.

Holiday finished the regular season averaging 15.9 points, 6.4 assists and 3.9 rebounds per contest for the Pelicans. He is also one of the best perimeter defenders in the league, despite being surprisingly snubbed from the NBA All-Defense teams this year.

If Holiday hit the free-agent market in 2021, you better expect to draw interest from several teams that are planning to compete for the playoffs in the next few years. 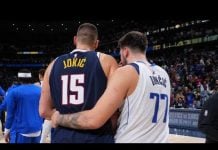 Brad Underwood: “We try not to ever recruit anybody that has...