The season is over for the Milwaukee Bucks after they were eliminated by the Miami Heat in five games in the Eastern Conference semifinals.

The future of Giannis Antetokounmpo has been a subject of many speculations with many analysts predicting the Greek superstar to leave the Bucks if the team fails to win a title in two years.

However, Giannis quieted the rumors by saying he wants Milwaukee to improve and go further next time. Should he decide to stay, which seems likely, the reigning NBA MVP will probably try to push the Bucks management to add another star to the roster. 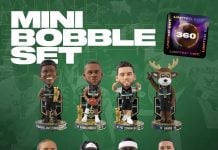