“We were playing so bad and they got Steph, KD, Klay and Draymond and we were playing at the end of the year,” Caruso said. “We were out of the playoffs already … LeBron’s not playing … we were down like 20 in the first quarter … and I was 0-for-6 to start the game and that was my first made shot. Nobody ever remembers how bad we were playing or how bad the game was, they just remember that dunk.” 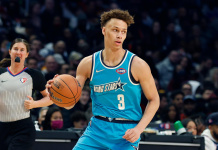