Tobias Harris took rookie Matisse Thybulle “under his wing” this season in Philadelphia. The veteran said Thybulle is constantly running late in their pre-game routine.

The University of Washington alumni started to feel comfortable being a regular in Brett Brown’s rotation from the start of the season. On the other hand, he seems to need to work his time management in pre-game routine according to Tobias Harris, per USA TODAY:

“This right here is literally me every game. We’re supposed to be out in the tunnel with like 19 on the clock,” Harris said in an interview with the team’s social media team. “Say a prayer and then run out onto the court. I always tell Matisse at like 25 minutes, ‘Get your stuff on. Get ready.’ He always says, ‘Oh, I have plenty of time.’”

“Sure and behold, 19 on the clock, even maybe less than that, he comes running out, he doesn’t have his sweatpants on. He doesn’t have his sneakers tied up and it’s either me or always Mike telling him, ‘Next time, we’re just going to leave you!’ We’ve let it go on too much this year but that’s me, in a nutshell, telling him, ‘Come on, bro. You can’t keep doing this!”

Thybulle is showing his defensive versatility from his first day in the NBA helping the 76ers with his 4.1 points, 1.5 rebounds, 1.2 assists and 0.7 blocks per contest.

Danny Green addresses Sixers’ playoff elimination: “I think we skipped some steps and we got too comfortable” 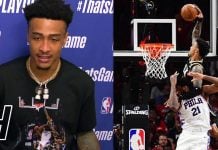 Joel Embiid to Sixers fans after Game 7 loss: “Sorry to disappoint you again”

“Carmelo Anthony would be a very good fit with the Lakers,”...