Jordan may not have been able to play most of the 1999 lockout-shortened season anyway, as he severed a tendon in his finger while attempting to cut a cigar at a casino in the Bahamas.

ESPN’s Zach Lowe brought up the forgotten tidbit about Jordan in a recent profile of Toni Kukoc.

Not much is known about how it happened.

In an interview with the Chicago-Sun Times in 2000, Jordan said that the cigar cutter was “cheap” and broke as he pressed down on it.

It was originally described as an injury that would take six weeks to heal, but Jordan was left with nerve damage in his hand.

He also told the Sun Times that he was no longer able to palm a basketball and underwent a second surgery to repair the injured hand.

“When Hefferon did the surgery, he saw all the ligament damage I already had from dislocating my finger so many times,” Jordan said. “So the only thing he could do was reattach the tendon. He said, ‘You’ll lose some mobility, there is nothing I can do.'” 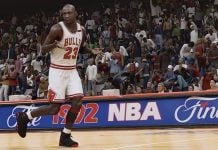 Isiah Thomas reignites rivalry with Michael Jordan due to The Last Dance portrayal: ‘Until I get a public apology, this beef is gonna go...