CSKA Moscow decimated Panathinaikos in Athens (66-97) and secured its place in the EuroLeague playoffs.

The Muscovites became the fifth team that qualifies for the postseason after Anadolu Efes, Barcelona, Real Madrid and Maccabi Tel-Aviv.

CSKA improved to 19-9, whereas Panathinaikos fell to 14-14. The “Greens” suffered their fourth straight loss and sixth in the last seven games and their presence in the playoffs now is in jeopardy.

In Madrid, Real stood tall and earned the 87-78 victory over ASVEL Villeurbanne, extending their winning streak to seven games.

The “Whites”, who have already advanced to the postseason, raised their record to 22-6. On the other hand, the French dropped to 10-18 and are on the brink of elimination.

In Spain, and in a game that was played behind closed doors due to the outbreak of the coronavirus, Armani Milano survived Valencia and remained alive in the playoff race.

It was a late overtime thriller that was decided in the final seconds, with Vladimir Micov making the game-winning three-pointer at the buzzer and handing the Italians a much-needed win (81-83).

Armani snapped a five-game losing streak and improved to 12-16. On the other hand, the Spaniards suffered their fourth loss in a row, which decreased their chances to reach the playoffs.

Valencia is also at 12-16, on a five-way tie at the eighth spot in the standings. 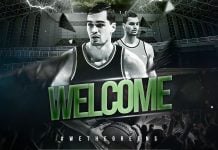 Kyle Kuzma out vs the Suns with heel injury