A petition to change the NBA logo, including Kobe Bryant was initiated. And over one million signatures for a request to make Lakers great, the new NBA logo was signed.

Everyone in the world thinks about how to honor the tragic death of Kobe Bryant. Basketball fan Nick M. started a petition at Change.org for NBA to turn the future Hall of Famer into the new NBA logo, replacing another Los Angeles legend in Jerry West (At the moment on the NBA logo is the silhouette of the legendary Jerry West based on a photo by Wen Roberts).

“With the untimely and unexpected passing of Kobe Bryant please sign this petition in an attempt to make his memory last forever as the NBA Logo.,” Nick M. penned in his straightforward petition.

You can find some new NBA logo visualizations and ideas below. There are even suggestions to change the STAPLES Center name.

Some ideas for the NBA to honor the legendary Kobe Bryant:

All ideas are received very positively by the fan communities all over the world.

An online petition is going around to use Kobe Bryant’s image as the new logo for the NBA, nearly 2 million people signed. 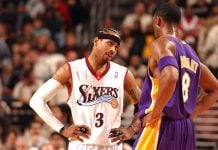 Chris Broussard: “76ers will match hardball with Ben Simmons and not...

Leandro Bolmaro parts ways with FC Barcelona to move to the...

Jason Kidd on Luka Doncic: “What an incredible 22-year-old”