Another weekend of basketball in Europe’s domestic leagues is highlighted by the fifth loss of Unicaja Malaga in ACB, yet another win for Montepaschi on top of Lega A, this time in Milan, a narrow Barcelona victory at Estudiantes, and Caja Laboral’s first loss of the ACB season, in Valencia.

Spain: This was the first Real Madrid game where they seemed to have an idea of what they were doing, even if Ettore Messina’s nervous gestures on the sidelines even at plus 33 suggested otherwise. Bilbao never stood a chance against Real, which played tough defense and had several easy fastbreak baskets, playing a slightly faster pace [71 possessions] than usual. Darius Lavrinovic, the man of the hour, had 8 points, 5 rebounds, 4 assists, 4 blocks, 3 steals, and one awkwardly missed fastbreak layup-dunk-hybrid. Louis Bullock had 21 points on a perfect 7 for 7 from the field. 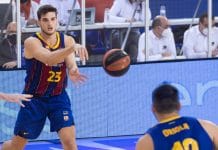