Many former professional athletes, including NBA players, have run for public office. And now there’s another prospective politician to keep an eye on. Former NBA big man James Donaldson posted this message on Facebook on Friday:

10 years ago, I was running for the office of Mayor here in Seattle. I did pretty well, but came up a little short.

Now I’m running for Seattle City Council – District 7, and ballots go out next week for the August 6 primary.

Please support and contribute at www.jamesdonaldsonteam.com

Others who held public office

Who are some other ex-NBA players who held public office in the United States?

Dave Bing served as the mayor of Detroit.

Kevin Johnson was the mayor of Sacramento.

Mo Udall, who suited up for the Denver Nuggets for one season, went on to have a long political career (U.S. House of Representatives; Arizona Democrat, 1961-91).

A year later, he entered the political ring as a mayoral candidate in Seattle.

In April 2010, Donaldson joined the College Success Foundation as its Tacoma, Washington, director.

A press release highlighted the role of the foundation: “The College Success Foundation is a 501(c) 3 non-profit organization formed to provide low-income and underserved students the scholarships, mentoring and educational supports necessary for them to attend the post-secondary institutions of their choice. It has awarded approximately6000 scholarships in the last decade.”

“James will provide leadership in the Tacoma community to double the number of Tacoma’s low-income students who graduate from high school and attend and graduate from college” said Bob Craves, the CEO and founder of College Success Foundation, in April 2010. “As the director of our Tacoma office, he will work closely with the Tacoma School District and other Tacoma community partners to benefit the youth of Tacoma.”

Donaldson, who turn 62 in August, has emerged as an advocate for raising public awareness about mental health while also seeking to help reduce the number of suicides in the United States.

Clearly, his own life experiences have played a part in his passion to make a difference. The Athletic published a lengthy feature about James Donaldson’s personal struggles and past suicidal thoughts, and how he wants to be a part of the solution.

The Seattle SuperSonics selected James Donaldson, a Washington State alum, with the 73rd overall pick (fourth round) in the 1979 Draft. He played for 3A Antoini Siena in Italy for a year before beginning his NBA career with Seattle in 1980.

The 7-foot-2 Donaldson averaged 8.6 points, 7.8 rebounds and 1.6 blocks in 975 regular-season games for the Sonics, Clippers, Mavericks, Knicks and Jazz. The old-school big man never attempted a 3-point shot in the NBA.

He played his final NBA game in 1995, then continued his career in Europe until 1999. 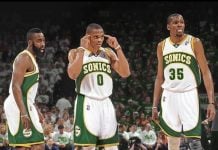 Seattle mayor: “I am 100 percent certain we’re going to get the Sonics back”

Mark Cuban: “I think there is a future where Seattle has a team” Robert Swift: “The day I got announced the starting center for the year I tore my ACL”

The Greatest British NBA Players Ever

Zach LaVine commits 12,000 meals to the city of Seattle