Jay Triano, coach of the Toronto Raptors, is as nice a coach as you’re likely to meet. He’s polite, well mannered, appears to be liked by his team, is extremely knowledgeable on the game and an overall gentleman. But the one point that is rarely made about him is that he is the first Canadian born and Canadian trained coach in the NBA.

It’s a little known fact but an interesting one.

Of course, his birthplace shouldn’t hold any importance in a league which has become as diverse as London, the city in which the Raptors played back to back games against the New Jersey Nets. But his views on whether the league is ready for a European coach are both important and interesting:

“I don’t think that’s going to be too far in the future at all. I think that’s right around the corner” confided Triano before continuing “I think there are outstanding coaches who coach in the Euroleagues now and who coach throughout Europe. They’re coaches that we learn from and I think that it’s just a matter of one of them getting the opportunity.”

Such thoughts could easily be dismissed as pandering to the media’s questions and being positive about the situation when speaking to European media.

But the opportunity to hire a European coach could be closer than first thought as Real Madrid recently lost coach Ettore Messina – a man not unfamiliar with winning having guided all his previous teams to trophies with the exception of Spanish club, Real Madrid.

And in a bizarre twist, it was Messina who was speculated upon as being the man to replace Sam Mitchell at the Raptors when Mitchell was dismissed in 2008. On this occasion though, he ultimately lost out to…Jay Triano.

So maybe Triano knows what he’s talking about when it comes to discussing the potential of European coaches in the NBA after all. 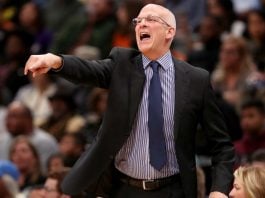 Andrea Bargnani – ‘If there was a lockout, I’d definitely think...

The future is now – Demar Derozan