RADES (AfroBasket 2015) – After a decade-long absence, Gabon made a triumphant appearance on Wednesday as they advanced to the Quarter-Finals of AfroBasket 2015 along with Nigeria, Senegal, and Algeria.

Against all odds, Gabon stunned Cape Verde 77-67 in the Round of 16 and Therence Gyll Mayimba played a pivotal role in the victory.

Mayimba came off the bench to lead the Gabonese with a team-best 17 points, while Cape Verde’s Mario Correia finished with a game-high 23 points.

It was a balanced contest throughout with no fewer than 14 lead changes.

Gabon trailed 41-39 at half-time but never gave up and Mayimba helped them come away with an impressive win.

Cape Verde entered the fourth quarter leading 58-55. However, they turned the ball over six times in that final period to self-destroy their hopes and expectations of advancing to the Quarter-Finals for the second time in a row.

Meanwhile, Algeria are back in the Quarter-Finals of the African Championship 10 years after finishing fourth in front of their home fans.

They defeated Cameroon 73-71 to set up a Quarter-Finals meeting against Senegal.

It was one of the most balanced games of the tournament so far, and the North Africans prevailed against Cameroon’s attempts to take the lead.

Mohamed Harat was at his very best, sparking Algeria with a game-high 23 points.

Earlier in the day, it was business as usual for Nigeria who advanced to the Quarter-Finals for the 11th consecutive time after trouncing Mozambique 83-47.

Despite the best efforts of Augusto Matos, Mozambique never posed a real threat as the Western Africans led for all of 20 seconds.

Matos, the only player to score in double digits for his team, finished with a joint game-high 14 points, but that wasn’t enough to avoid elimination for the Mozambicans.

In the first game of the day, Senegal had little trouble in going up against AfroBasket debutants Uganda as they scored a comprehensive 79-48 victory.

Although Uganda led for seven minutes early in the contest, Senegal’s Antoine Mendy made sure to get his team back on the right track as they improved their AfroBasket 2015 record to 4-0.

Mendy’s game-high 22 points were too much for Uganda, who themselves counted on Stanley Ocitti’s team-best 16 points. 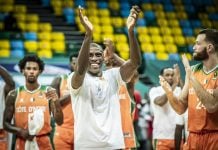