NBA insider Adrian Wojnarowski reports that the Spurs are signing Alize Johnson who played for the Austin Spurs in the G League most recently. To create the roster San Antonio is waiving Jordan Hall. 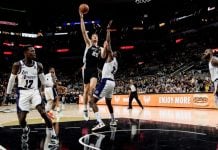