As LeBron James finally made a return on Friday after a lengthy absence, he has nothing but praise on the carry job that Anthony Davis committed for the Los Angeles Lakers.

For James, he thought Davis transformed into “the best player in the league” in the five previous games he missed as he nursed his adductor strain.

“The guys played some good basketball when I was out. You know, I thought AD was the best player in the league over the last, you know, four or five games,” James told reporters after the Lakers’ Friday win over the San Antonio Spurs. “Just his numbers and productivity on both sides of the floor.

“You know, it’s not just offensively but defensively he has been super engaged.”

Davis was truly masterful on those times with James taking his time to recover, wherein he averaged 33.2 points, 17.4 rebounds, 2.6 blocks, 2.2 assists and 2.2 steals while shooting 59.6 percent from the field on the given stretch without his four-time MVP running mate.

A result of the All-Star big man’s driving force was the Lakers’ fair 3-2 record on the five-game stretch. With James finally on the lineup, they just easily picked up the 105-94 dub over the San Antonio Spurs on Saturday.

Though the start of their season had plenty of bumps along the way, the Lakers faithful can at least be delighted and optimistic with James back and Davis trying to silence his critics by tearing it up when it mattered the most. 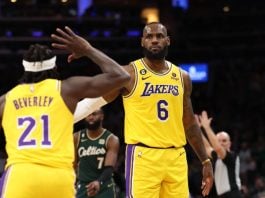